The results are in!  After reading thousands of submissions, Logomancers & Logodaedalists narrowed the entries down to a select group of finalists and then passed those finalists to Eek the Freak, L&L's resident poet, who was supposed to choose a winner.  Unfortunately, Eek backed out due to a crisis of nerves, but as this is a common occurrence with Eek, I made sure to keep the stalwart Madame Zabaletsky on call in case she needed to fill in.

Before we get to the results, let me just say that if you're ever in the Chicagoland area and someone steals your catalytic converter, you should go straight away to Iggy's Muffler Shop. 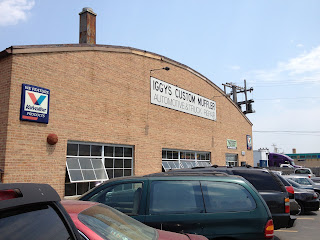 I rolled into Iggy's around 12:15 on a Thursday with no appointment and they had my car fixed before 2 at about a third of the price Midas quoted me over the phone. 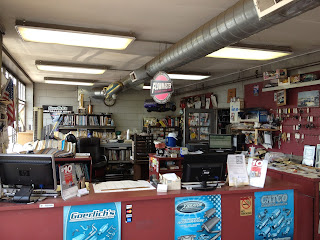 As you can tell from the photos, the place is classic, though don't expect them to do much more than grunt at you in what I can only describe as a not unfriendly way.


Mme. Zabaletsky:  There were many fine contributions to this year's contest, but three of the entries stood out head and shoulders above the rest.  That is why I decided to award winners in three different categories.

Wake up in the morning, greet the day with blissTry to be a better man, strive to be a catalystBut I give up before I start, my car is in paralysisBecause my catalytic converter was stole' by some assclown human cyst.--Chorus--Sucks to the assclowns who stole itSucks to the assclowns who stole itYou can help me move my car but we're gonna have to roll it.Oh, sucks to the assclowns who stole it.---------Leaving behind the past, concentrating on my new versionLearning from mistakes, avoiding old diversionsBut it's hard to keep a-moving on when transit is a burdenCan't believe some suck-ass clowns stole my catalytic conversion.[Chorus]Buddah says to let yourself go, be an uncarved stoneA lotus leaf on water, a cloud without a homeBut my emissions are toxic, and I'm fuming like a stackMy catcon was stolen by some suckass clowns and it ain't coming back.[Chorus]bridge:Like a bear in a truck on a train in a cave on a mic on a PA set to ten all up in your ear. Unpleasant to hear.Stolen to be melted down, by an obnoxious two-bit suckass clown... but baby, don't frown.[Chorus]

Mr. Hollander clearly knows his way around a musical score, and while I cannot discern whether he's had classical training or acquired this knowledge as a drug-addled frat boy who spent too much time printing guitar tabs off the internet, I found this submission accomplished and undeniably compelling.  The folksy clash between the narrator's desire for transcendence and his unassailable anger at the putative "ass clowns" who stole his catalytic converter drives the song forward with an irresistible comic tension.  I was also won over by the virtuosic bravado with which Mr. Hollander integrated the realizations of the nondual schools and the Facebook traffic on Mr. Driscoll's page.  Every piece of the puzzle was used, and used to harmonious effect, as in a well-fashioned sonnet.  This is a masterful effort, one which will stand the test of space and time (for anyone still bound by those confines to existence).

THE TERRIFYING TWANG OF THE LONELY HEART STRINGS AWARD goes to mmcxl for taking the theme and making it his or her own.

I found it a delightfully twisted and fittingly desperate choice to tell the story of a lover who has ruined his or her beloved from the perspective of a self-loathing barfly haunted by his or her narcissism, misogyny, and sadistic tendencies.  Full points for taking such a bizarre and demented narrative stance and making it ring true.  However, it would have meant still more to me had the author not remained somewhat hidden behind the shadowy moniker, mmcxl.  When in Rome, indeed, but we are not in Rome.  Not that another pseudonym would have been any better--an artist pretending to be a made up person is a distasteful conceit, especially in a case such as this.  Here is a subtle work brimming with psychological depravity, a piece that acrobatically defies any attempted critique, and the only mystery here should be how something so marvelously strange could be made by a mere mortal.

THE I'D LIKE TO KNOW MORE ABOUT BADASSERY AWARD goes to Jenny B.

A sort of unbridled power courses through these lyrics, and the furious anger of the perpetually wronged stokes the furnace of this churning locomotive.  Like the other winners, it is a highly accomplished piece of art, though I did feel at times the author might have been holding something back, perhaps for fear that the full storm of her literary power might have been too much for her mind or the mind of anyone who laid eyes upon it.  Though this threat can feel real, it is never something to be afraid of, and the artist must submit to power wherever it appears.  I hope the author will continue to let the dogs out, as Mr. Driscoll is fond of saying.  If this meaty piece is any indication, I suspect Jenny B.'s inner conflagration will continue to produce a whirlwind of great and towering art.

Congratulations to all who entered and especially those few who rose to the top of the heap.  It takes tremendous effort to excavate the creative fire from the belly, and it takes an equal amount of courage to share what you've shaped to be weighed and measured by the world.  Thank you for playing your hands.  You've each served your art wonderfully well.

Thanks, Mme. Z.  For my part I have nothing to say except that each of these winners blew me away, and I'm thrilled that writers of such high caliber arose to display their deep creative capabilities.  As promised, there will be a prize, but since each of these winners clearly deserves more than the $100,000 limit--beyond which my backer, the esteemed oil baron, Logodaedalist J.J. Hamperstead, refuses to go--each winner will receive an athletic sock (used but clean) with a forgery of Katy Perry's signature in pink Sharpie.  As you may well know, I do a perfect Katy Perry forgery, and I'm sure we can all agree that as this young lady's meteoric rise continues, it won't be long before an individual could sell one of those socks and retire.  Sam Hollander, mmcxl, and Jenny B., please send me your mailing addresses so you can get your sock, and once again, my hat is off.  You are Logomancers & Logodaedalists of the highest order.

Next up will be Part II of my conversation with Jeremy T. Wilson (unless I decide to post something else first).
Posted by David Driscoll at 11:26 AM