Poems From Under the Bed

Some of you may remember that Eek the Freak, L&L's resident poet, was scheduled to judge this year's lyric writing contest but backed out due to what I described as a crisis of nerves.  Turns out he was hiding under my bed, writing poems and crying.  I never did find him, but I found the tissues on which he'd been writing (and crying). 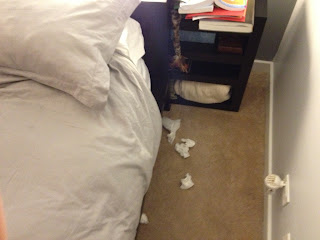 It was tricky--and sticky!--business trying to pick them apart, and I've barely made a dent, but I liked a lot of what I read, and I plan to transcribe as much as I can make out.  Someday it may turn out there is a whole chapbook there for Eek to publish.  Maybe it will be remembered as his under-the-bed period.

Anyway, here's one, but I'll warn you, you have to loosen up the bolts on your brain.  You have to let yourself sink down in there where its slippery and dark.  That's usually the way with poetry, though, isn't it?  I guess I just don't get enough of it.  I imagine most of us do not, even though that slippery-brain feeling is one of the finest around.  It's where we surprise ourselves, where we let go of the incessant struggle to marshal our lives into stories that make sense.  That process begins with the way we direct our thoughts, and what a strange thing to do, really.  I mean, it is what we do, but seriously--try to make sense of life?  C'mon, Jackson.  You know better than that.

I found a toothpaste tube you can use. . . If you want. Never really told anyone about the time the castle made a room out of me. Bob was there, and it wasn't pretty. Never mind. I never should have told you all these things. Your design was too intense and then the way you took that corner. That was really too much. I never wanted to tell you the difference between us was a quater turn to the right.

I make muffins. I put them in the oven to bake. What do you do, friend? Do you call upon the nation? Do you up wreak and toil?  Do you maximize potentialities and turn them over in your mind?  How high is this plane of existence? Is it tabled low and wrapped round the head of Caesar’s bed sheet? Truthfully, I'm trying to get through truthfully, but I can't seem to find my way.

Teleportation would seem to be the easiest. But you never know. The thing about that is we so often lose the day. To and from the difficult places. I never met a rock with so many teeth.

A simple design would hold more elegance than this. But what is a design? Who wards away the VIP? A tumbler platters down onto all floors. I taste and recede.

It's a lucky day, the day I have you to hold upright and shake until the coins work their way out your pockets. Drained of the Terrible Fill, you and I will be left still holding these melted words. And the truth is we may never know the difference between an antelope and all that came before, but what exactly does that tell us about the rain that falls inside?

You who are truthful: be beside yourselves for a minute. Lay down your bodies and see the brutal insistence is not something you need to even countenance, let alone fear. Words float around, and it can be fine that they fall in such long, loose patterns.

Stick with me and you'll never go wrong. You'll never go wrong and yet one day you'll see all the differences have faded into a meaningless need that will issue forthily from you as strongly as the ropy snakes you saw shooting out of your chest. Exercised and fed, you stand with your brother ready to tell your lies and finally not suffer for it. I have found my way across the sea. Over millions of legions, I've found my way onto a space drawn up by the outer bounds of what either of us thought possible, and the result is surrender.

Posted by David Driscoll at 9:11 AM

Email ThisBlogThis!Share to TwitterShare to FacebookShare to Pinterest
Labels: Eek the Freak, making sense of life, surprise ourselves